I do yoga three times a week in the mornings, and I don't like to eat much beforehand or else I start to feel queasy during downward dog! On those days, I want to bring a substantial post-yoga breakfast to campus to eat after yoga but before my next class. I need something that is portable and doesn't spoil, something filling but won't make me feel guilty, especially right after exercising. 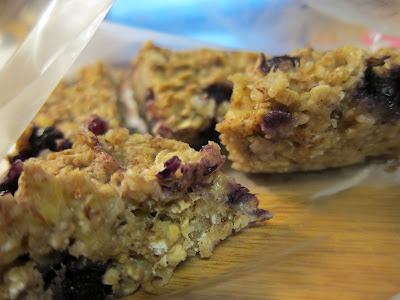 (my version)
These were an amazing discovery. I can literally whip them together in less than 5 minutes in the morning. They remind me of the baked oatmeal blueberry bars that my mom sometimes makes at home...only these are quick and easy! You can make these oat cakes as a fast breakfast or a portable snack bar.
So, here it goes:
(adapted from http://www.loveveggiesandyoga.com/2011/02/microwave-blueberry-banana-oat-cakes.html)
Microwave Blueberry Oat Cakes
1 medium banana
~ 1/2 a cup of raw oats
cinnamon to taste (I used around 1 tsp)
~ 1 tsp of flax seeds (optional, for additional fiber)
~ 1/2 cup of frozen blueberries
**you can also add brown sugar, honey, raisins, cubed apples...be creative! I've even substituted about 1/2 the oats for quinoa flakes before, just to vary it up a bit.**
All measurements are approximate; I just eye it!
1. Mash up the banana.
2. Mix in the oats, cinnamon, and flax. Make sure all the oats are covered.
3. Fold in the blueberries.
4. Microwave for 3-4 minutes. You'll know it's done when the top is no longer bubbly and it's a solid-looking cake.
5. Let cool; cut around the edges and wiggle it out. Eat immediately or bag it up for a snack!
My raw ingredients. All of these are easy to store in my desk's drawer and have multiple uses. 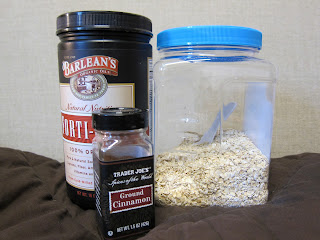 After mashing the banana and starting to mix in the oats. It's best to do this in the bowl that you're going to microwave in, so you save yourself from washing extra dishes! 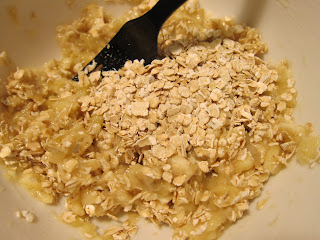 Adding in the cinnamon... 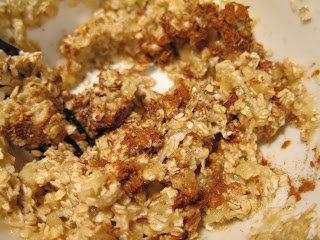 ...and blueberries. I keep a tupperware of frozen blueberries in my freezer. I used to buy fresh ones, but I found that sometimes they'd go bad before I could finish them! The frozen ones are also great to throw in oatmeal, yogurt, or salads. The dining halls almost never have berries, so I make sure to buy some as a source of antioxidants. 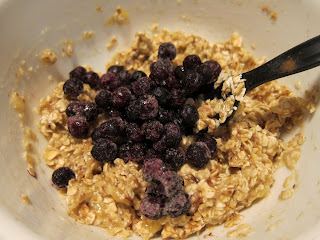 All mixed up, after microwaving for 3.5 minutes. It doesn't look too appealing in the bowl, but I promise, it tastes good! 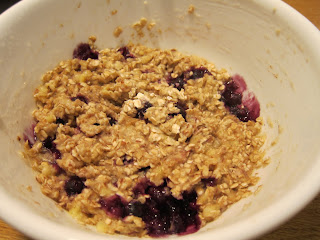 Let it cool, then cut into slices: 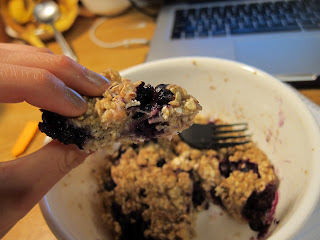 Then bag them up! You can even make them the night before to save even more time. Hey, as a college student I value every minute of sleep! 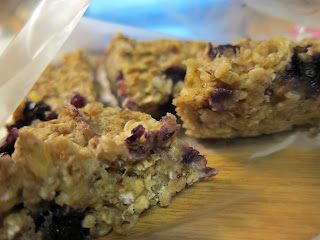 I take them on the go. They're pretty sturdy and don't break up when I throw a bag into my backpack. 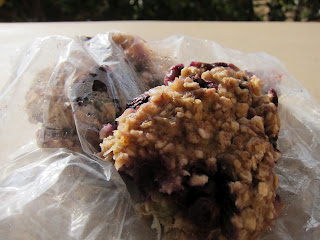 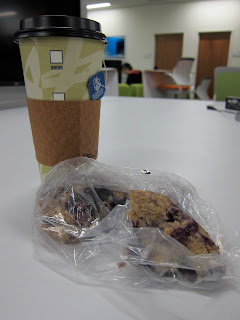 There you have it! Quick, clean, healthy--and so easy to make in a dorm room! Have fun with different flavor combos :)

What do you do for breakfasts on the go?
Posted by lntu at 1:54 AM

Email ThisBlogThis!Share to TwitterShare to FacebookShare to Pinterest
Labels: recipes