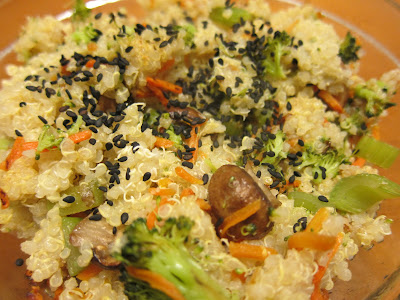 I'm Chinese. Fried rice is pretty typical fare. I actually didn't grow up eating too much of it, although my mom would make it once in a while. Us kids would love it and would finish off an entire pot for dinner. 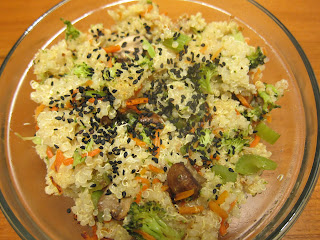 I was hungry when I got back from lab meeting today. Super hungry, and was craving comfort food! I didn't want to heat up the apartment and turn on the oven to bake something or leave the stove on for a long time to make a stew. So then I remembered my childhood love of fried rice...and a brilliant thought came into my head: why not make fried quinoa?? I actually don't have soy sauce in my apartment yet (yes I know, a disgrace to my Chinese heritage!!) so I modified the flavors of the dish.

The process was pretty simple; I first stir-fried the veggies and made the quinoa in a rice cooker, then tossed it all together in the pan with some oil to crisp it up!

Fried Quinoa
1/2 cup broccoli florettes (I get the bagged kind from Trader Joe's and break them into smaller pieces)
handful of shredded carrots
stalk of chopped celery
1/4 cup mushrooms, sliced
(you can use any veggies you want; these were just the ones in my fridge that I threw together! It would taste really good with some bell peppers or even peas and carrots...be creative and resourceful!)
1/2 cup quinoa
chicken broth or water
olive oil
cumin
salt & pepper


1. Cook the quinoa! I put 1/2 cup (about 1 serving size) into the rice cooker and poured in chicken broth (or you can use water) up to the 1 cup line. Quinoa absorbs a lot of liquid so you want to use twice as much as you would use for the same amount of rice!

2. Chop the veggies up into similar-sized pieces. I made mine small enough so that I could use a spoon to eat this dish.

3. Stir-fry away! A tip that I learned from my mom: don't add all the veggies in at once. After the oil is hot, put the slower-cooking veggies in first, then add the others slowly. This is common sense but it's essential to cooking the veggies correctly! I actually steamed the broccoli before adding it to the pan so that it softened up a bit. This is the order I added the ingredients I used: celery, carrots, mushrooms, then steamed broccoli. Season with salt and pepper. I actually covered the pan for a few minutes after seasoning to let the veggies cook a bit more intensely and for the flavors to come out.

4. After the quinoa is done (the magic of a rice cooker: you just leave it in there until it beeps!!) open the lid and let the steam out of the rice cooker. Add the cumin (as much as you desire) directly into the rice bowl and mix well.

5. Add the quinoa directly into the pan with the stir-fried veggies. Turn the heat on high and mix it all up. This will get rid of any soggy-ness of the quinoa and crisp it up nicely. It also helps distribute the flavors! 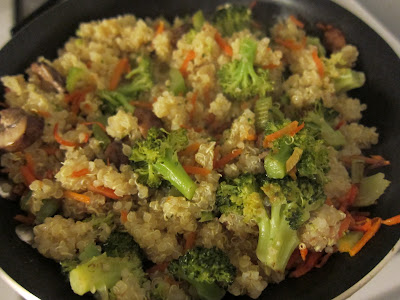 6. Serve and eat up :) I sprinkled black sesame seeds on top for an extra crunch! 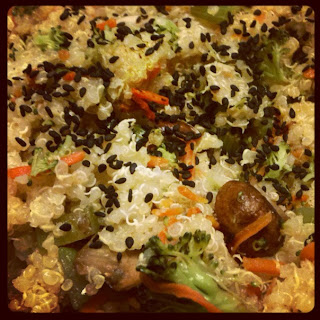